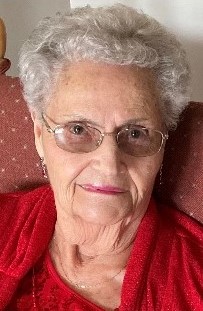 Veva Belle Siegel Windish, 95, of Brimfield, passed away on September 13, 2022, at Unity Point Hospital in Peoria.
She was born on March 6, 1927, to Frank and Nellie (Penn) Siegel in rural Hanna City, IL. She married Eugene Windish on February 16, 1952, in Hanna City. He passed away on December 20, 2019.
Surviving are three children: Roger (Debbie) Windish of Elmwood, Joy (Dennis) Crouch of Eureka, and Michael (Renee) Windish of Brimfield; nine grandchildren, Matthew, Amanda, Kevin, Mackinze, Jeremy, Cody, Jessica, Jason, and Adam; and also 29 great-grandchildren.
Veva is preceded in death by her parents; four brothers, Elwood, Edward, Bob, and Darrell; and three sisters, Pearl, Vivian, and Marie.
Veva was a homemaker who spent her life helping others. She helped all ages from babies to elderly. She spent many volunteer hours at her church, Southside Mission, and the Farmington Moose Lodge.
Taking care of her family and a neat and tidy home were her top priority. She enjoyed dancing with her husband, Gene. For many years, they would attend dances every Saturday night.
She was a member of the Elmwood United Methodist Church and the Farmington Moose.
Per Veva's request, there will be a private graveside service for family at Elmwood Township Cemetery. A Celebration of Life will be held at 11:00 a.m. on Friday, September 16, 2022, at the Elmwood United Methodist Church for family and friends.
In lieu of flowers, memorials may be made to B.Y.E. Ambulance and the Elmwood United Methodist Church.
To leave online condolences, please visit www.oakshinesfuneralhome.com

Services for Veva haven't been added yet. Sign up below to be notified when the services are updated.