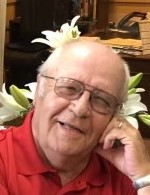 Richard A. Powers, 81, of Elmwood, passed away at 7:30 a.m., on Sunday, June 12, 2022, at his home surrounded by his loving family.
He was born July 14, 1940, in Peoria, to John and Vera (Northrup) Powers. He married Sherry Clark on May 5, 1963 in Elmwood. She survives.
He is also survived by three daughters, Jill (Quentin) Osborne of Galva, Michelle (Mike) Largent of Elmwood, and Denise Powers of Elmwood; one sister, Norma (the late Ken) Hanley; one sister-in-law, Peggy Powers; and three grandchildren, Michael (Megan) Largent, Marissa Largent, and Clayton Bumphrey.
He is preceded in death by his parents; and two brothers, Jack Powers and Robert Powers.
Richard served in the Army Reserves. He worked as a Coal Miner for 10 years and eventually retired as a Truck Driver at Thermogas in Farmington. After retiring, he worked for the City of Elmwood mowing the ballparks. He also helped John McKinty at McKinty Farms during harvest. He was a member of the Farmington Moose.
A funeral service will be at noon on Saturday, June 18, 2022, at Oaks-Hines Funeral Home in Elmwood. A visitation will be held prior to the service from 10:00 a.m. to the time of service at the funeral home. Burial will immediately follow at Elmwood Township Cemetery.
In lieu of flowers, memorials may be made to My Place's St. Jude Fundraiser.
To view Richard's video tribute or to leave online condolences, please visit www.oakshinesfuneralhome.com