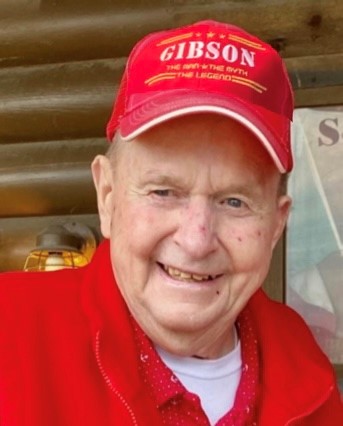 Get Tribute Updates
Share
Confirmation Grief Tribute Notifications
Iframe toggler
Free Newsletter
Join Now
Find Us On Facebook
Join Now
How Did We Do?
Review Us
Get the latest updates for Robert D. Gibson's obituary straight to your phone Signup Now

Robert Dean (Bob/Hooter) Gibson, 95, of Elmwood IL, passed away Saturday, January 15, 2022, at Graham Hospital in Canton, IL.
He was born to Cyril and Eva (Craig) Gibson on May 27, 1926, in Victoria, IL.
He married Bertha E. Korth in September 1948; she passed away in 1985. He also had a long-time companion, Ruth (Yerby) Korth; she passed away in 2007.
He is survived by his daughters, Linda (Steve) Turner of Glen Ellyn, IL, and Diana (Bryan) Quinnelly of Mesa, AZ; grandchildren, Brian (Jamie) Wong of Henderson, NV, Kevin (Carolyn) Wong of Wheaton, IL, and Caroline Quinnelly of Scottsdale, AZ; great-grandchild, Ezra Wong of Wheaton, IL.; sister-in-law, Irene (C. Ronald) Gibson of Farmington, IL; nephews & nieces, Gene (Peggy) Gibson, Kenneth (Janet) Gibson, Sharon (Bill) Coykendall, Pam (Ted) Richardson, Debbie (Steve) Boyer, Ellen Brogan, Judy (Gordon) Morris, and their families. He was especially close to his great-nephew, Wes (Shari) Coykendall, neighbor, and close friend, Val Bybee, and Elsie Anhalt.
He was beloved by his family and his many friends.
He was also preceded in death by his parents; siblings, C. Ronald Gibson of Elmwood, IL, Helen (Gibson) Bailey of Knoxville, IL, and Leslie Gibson of Victoria, IL; mother-in-law and father-in-law, Edward and Eva Korth; brother and sister-in-laws; Richard & Eloise Korth, Richard (Helen) Bailey, and Donald & Betty Korth; and nephew, James Bailey.
After graduating from Elmwood High School, he served in the Navy from 1944 to 1946, as the Yeoman Third Class USNR, where he was awarded the American Area Ribbon, Asiatic Pacific Area Ribbon, Philippine Liberation Ribbon, and the World War II Victory Ribbon. He also was an active member of the VFW for over 50 years.
He resided in Elmwood, Laura, and Monica farming and working construction as part of the local operating engineers; and for several years, he ran the former Fiesta Club in Brimfield, IL.
He also resided in Daytona Beach, FL, where he worked with Local 673 to help build Disney World.
He then returned to Peoria, IL, working for Caterpillar where he retired in 1989. After retiring, he resided to his families former farm in Abingdon, IL, and later moved to Elmwood, IL.
He was an avid hunter, fisherman, loved red vehicles especially convertibles, and loved flying, over the years owned multiple airplanes as a private pilot. He also loved traveling and playing cards as well as watching baseball and football.
A Celebration of Life will be held from 4:00 p.m. to 7:00 p.m. on Saturday, May 14, 2022, at the Banquet Hall next to the Elmwood Tap in Elmwood. Please bring Hooter memories, stories, pictures, etc.
In lieu of flowers, memorials may be made to B.Y.E. Ambulance, Elmwood, IL, or St. Jude's Children's Memorial Hospital.
To leave online condolences, please visit www.oakshinesfuneralhome.com

Arrangements are being handled by Oaks-Hines Funeral Home and Crematory in Elmwood.

Dear Diana, although I did not know your dad, I heard you so many times you talking about him with love, that it feels as if I knew him a bit. The fact that our fathers had a similar age made the conversation about parents a frequent topic, and it makes me sad that you have lost this important part of your family. I wish you and your dear ones to find the serenity that comes from having given him all the love you could, which for sure was at a core of his living a good life. A big hug, Eva

I remember your dad very well. Would see him in the field next to ours many times. Sorry for your loss Linda and Diana. Steve Fuller

We did not know Bob well, but we live 2 doors down, and I always spoke with him when we were out at the same time. We're grateful for his service to our country, and we are so sorry for your loss. He was so much fun to visit with and talk to. Prayers for you all at this difficult time.

Linda, Diana, Wes and the entire Gibson family.
Bob was an amazing man. We loved to hear stories of his life and all the other great conversations we have had over the years. He was so generous and always made sure we had sweet corn and stocked up on tomatoes from his garden. Bob will be missed so much He was like the grandpa that lived next door. Our thoughts and prayers are with all of you please let us know if there is anything we can do to help you Love Jeff and Dianna Price.

My heart goes out to you and your families. I loved your Dad so much, he was always such a wonderful person to me. I know that my Dad and your Dad have been friends for most of their lives and he will be very sad to hear that your Father has passed. I will try to reach you by telephone to update you on my Dad as well. Please know that you are in our thoughts and prayers.

RIP Uncle Bob!!! We will miss you and your many stories of a life well lived 😘

The services for Robert have not yet been added. Please sign up below to be notified when the services are ready.

The attached photos are added to the memorial of Robert D. Gibson to help share their legacy.

Thank you for sharing your memory of Robert