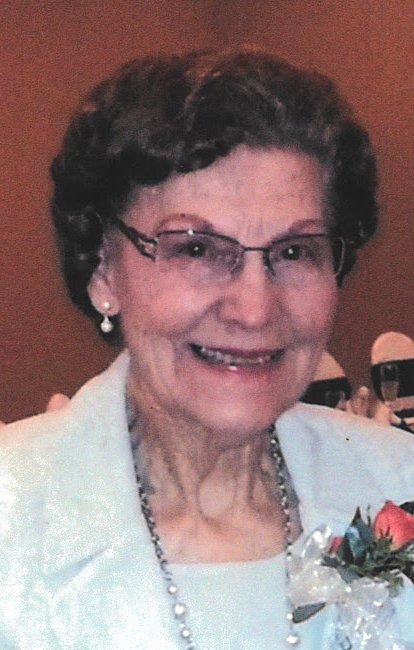 Get Tribute Updates
Share
Confirmation Grief Tribute Notifications
Iframe toggler
Free Newsletter
Join Now
Find Us On Facebook
Join Now
How Did We Do?
Review Us
Get the latest updates for Minnie R. Cebuhar's obituary straight to your phone Signup Now

Minnie R. Cebuhar
Canton - Minnie R. Cebuhar, 94, passed away at Graham Hospital Extended Care on May 26, 2021.
She was born October 14, 1926 in Norris, IL, to Joseph and Jennie (Buffo) Moschero.
She married John C. Cebuhar on October 18, 1947 at St. Mary's Catholic Church in Canton, IL. He preceded her in death on February 16, 2013. They were married for 65 years.
Surviving are one son, Bob (Krista) Cebuhar and one daughter, Diane (Mike) Parkinson, both of Canton. Also surviving are five grandchildren: Jason (Amber) Parkinson of Dunlap, Alicia (Justin) Nelson of Canton, Brad (Stephanie) Cebuhar of Tinley Park, Drew Cebuhar of Canton, and John (Laura) Parkinson of Bartonville; four great grandsons: Luke Nelson of Canton, Takeo and Arlo Parkinson of Dunlap, and Oliver Cebuhar of Tinley Park; two great granddaughters: Claire Nelson of Canton and Tatum Parkinson of Bartonville, with another great granddaughter due in October. She is also survived by her loving nieces and nephews, Jim (Dee) Maynard, Judy (Jerome) Wallace, Barb (Bill) Cook, Pat (Susan) Cebuhar, Jim Cebuhar, Kathy (Patrick Westart) Williams, and Larry (Kathleen) Cebuhar, and several cousins, great-nieces and great-nephews, all of whom she was very close to.
She was preceded in death by her parents, two sisters and three brothers-in-law, Nina (Roy) Youngblood and Madeline (Ben) Turner, and Charles Maynard, one brother and sister-in-law, Jim (Lucille) Moschero, two nieces, Mary Jane (Michael) Brown, Patty Scott, and one nephew, Joe Moschero.
She graduated from Farmington High School in 1944 and from Liberty Beauty School in Peoria in 1945. She worked four years as a beautician in Canton. She and her husband were co-owners and operators of Joe's Place in Norris for 38 years, which was established by her parents in 1937. She and her husband retired in 1987. Her brother, Jim Moschero, and his wife Lucille, were co-owners with them for the first 13 years.
She was a former member of St. Mary's Home and School Association during the time her children attended St. Mary's Catholic School where she served two terms as Vice President. She was a member of St. Mary's Altar & Rosary Society.
She was a former member of the Canton Jr. Woman's Club, where she served one term as Historian. She was a member of the Canton Country Club Ladies Golf Association for over 50 years and served on various committees during those years. She loved golfing, played in many tournaments, and won many trophies. She played golf until she was 88 years old.
She played cards (pitch) with a wonderful group of people once a week.
She was a bowler and, in 1961, she and Helen Ladda placed ninth in the Doubles at the Illinois Women's Bowling Association State Tournament.
Minnie also loved dancing, fishing, and working in her flowers. Her greatest joy was her family, who were very dear to her. She was very proud of her Italian heritage.
She was a wonderful and loving wife, mother, grandmother, great grandmother, and aunt. She was very kind and always helping people. She will be greatly missed.
She was a member of St. Mary's Catholic Church in Canton where Funeral Mass will be held on Tuesday June 1, 2021, at 11:30 a.m. Visitation will be held from 10:00 a.m. to 11:30 a.m. at the Oaks Hines Funeral Home and Crematory in Canton.
In lieu of flowers, memorials may be made to St. Joseph's Cemetery Perpetual Care Fund or the St. Mary's Food Pantry.
To leave online condolences, please visit www.oakshinesfuneralhome.com

Minnie was a wonderful lady. Always a smile on her face! She lived a long and joyful life and will be missed by all who knew her. But she will again be with John and I'm sure that is just fine with her!

Our sympathy for the loss of Minnie. She touched the lives of all those she came across. We are keeping your family in our thoughts and prayers.

Minnie & John were lifelong friends & we had many interactions in both Illinois & Florida. They were the best & a special part of my life is gone with their passing. I look forward to our future meeting. Condolences to the family. Sadly, John Welch

Bob,Kathy and I are so sorry for your loss. The, loss of (a) mother is so very, very, hard and sad. Her, soul will be in our prayers. Alex,iii ,Kathy Henseler.

RIP: My sincerest condolences on the death and sorry for your loss of Grandma. Ashok Muniyandi.

Deepest sympathy going out to my Aunt Minnie's family. I will always remember my Aunt Minnie as a very sweet, kind, caring lady. She will be greatly missed by so many!
Kathy (Cebuhar) Williams

So sorry for your loss. My thoughts and Prayers are with you all at this timee

Will be thinking of you all during this time. We will all meet again . God bless

My heartfelt sympathy and prayers to the family, May your hearts be filled with wonderful memories of joyful times you shared together as you celebrate a life blessed and well lived. Psalms 90:10

I have been going to call Minnie and put it off. Now I feel so bad that I didn't. I would see her at mass and tease her about being my girl friend. We had some great chats. She is one of those people that makes you feel good to be around. She has always been in my prayers. I have been blessed and so has her family that our lives have crossed hers. Bless her Lord Jesus and take her into your flock.

I was so sorry to learn of Minnie’s passing. She was such a sweetie and I know she will be dearly missed by her family and friends. Condolences to all of you. Dee Doubet

My Aunt Minnie was a special lady whom I always admired and wished to emulate -- we will miss her very much. Judy [Maynard] Wallace and family

God bless all of her family. She was such a sweet lady and always had a smile! Love and prayers for you all.
John and Glo Davis

Such a wonderful Lady! Our thoughts and prayers are with you! She and John will be together again!

May the Lord bless and watch over your family during these sad times. Prayers be with all of you, We are sorry for your family's loss.

The attached photos are added to the memorial of Minnie R. Cebuhar to help share their legacy.

Thank you for sharing your memory of Minnie