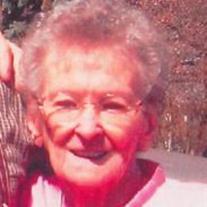 Marguerite Dye
Canton Marguerite Dye, 92, of Canton, died at 3:37 p.m. on Tuesday, May 5, 2015 Graham Hospital in Canton.
She was born January 27, 1923 in Kentwood, LA to William and Nola (Raley) Hammons. She married Dr. Richard Doc Dye on November 10, 1944. He preceded her in death on February 8, 2007.
She is survived by three sons, Howard (Sheila) Dye of Canton, Richard Dick Jr. (Mickey) Dye of Canton and Glenn (Jean) Dye of Bartlett; six grandchildren; two step-grandchildren; four great-grandchildren; and two step-great-grandchildren.
She was preceded in death by her parents and eleven siblings.
Marguerite was a homemaker and helped her husband at the veterinarian office. She was a former member of the Canton Country Club, a Charter Member of the Wee-Ma-Tuk Hills and a member of the United Church of Christ in Canton. She enjoyed golfing, fishing in her younger years, and doing crossword puzzles.
Cremation rites have been accorded. Graveside services will be held at 11 a.m. on Saturday June, 13, 2015 at Hyatt Cemetery in Wee-Ma-Tuk. Oaks-Hines Funeral Home in Canton is in charge of arrangements.
Memorials may be made to the American Lung Assoication.
To leave online condolences, please visit www.oakshinesfuneralhome.com